This Species Status Assessment (SSA) reports the results of a comprehensive review for the eastern indigo snake (Drymarchon corais couperi, hereafter recognized by its currently accepted name, Drymarchon couperi). The species was listed as threatened on March 3, 1978 (USFWS 1978) under the Endangered Species Act (ESA) due to threats from habitat modification, collections for the pet trade and gassing while in gopher tortoise (Gopherus polyphemus) burrows (USFWS 1978). This SSA provides a thorough assessment of the species’ biology, its biological status and influencing factors, and assesses the species’ resource needs in the context of determining the species’ viability and risk of extinction. Using the SSA framework, we consider what the species needs to maintain viability by characterizing the status of the species in terms of its resiliency, representation and redundancy (together the 3Rs). This process used the best available information to characterize viability as the ability of the eastern indigo snake to sustain populations in its natural systems over time.

The eastern indigo snake is a large, non-venomous snake with populations occurring in portions of Florida and southeastern Georgia. Historically, the eastern indigo snake occurred throughout Florida and in the coastal plain of Georgia, Alabama and Mississippi. Although the eastern indigo snake is difficult to consistently locate in the field, important life history characteristics and species needs have been learned from numerous studies. The eastern indigo snake is a diurnal species. The species prefers upland habitat types (e.g. longleaf pine sandhills, scrub, pine flatwoods, tropical hardwood hammocks, and coastal dunes), but also uses a variety of lowland and human-altered habitats. They may move seasonally between upland and lowland habitats, especially in northern portions of their range. Throughout their range, eastern indigo snakes use below-ground shelter sites for refuge, breeding, feeding and nesting. They depend on gopher tortoise burrows in xeric sandhill habitats throughout the northern portion of the species’ range for overwintering shelter sites. Adult eastern indigo snakes move long distances and have very large home ranges; from several hundred to several thousand acres (tens to over a thousand hectares). On average home range sizes are larger for males, and also vary by season and latitude. Home ranges in the northern portion of the range are larger than in the southern portion. Eastern indigo snakes may live for 8 to 12 years in the wild, become sexually mature around 3.5 years of age and breed October through January. They consume a wide variety of animals, including other snakes.

The primary negative factors influencing the viability of the species are from habitat fragmentation and loss due to land use changes, especially urbanization. Urbanization includes a variety of impacts which remove or alter available habitat or impact snakes directly including: residential and commercial development, road construction and expansion, direct mortality (e.g. road mortality, human persecution), invasive species, predation and inadequate fire management. Habitat loss for coastal populations due to sea level rise is also an increasing risk.

The cooperation of many partners to implement conservation efforts can help mitigate the negative factors and positively influence long-term viability of the species. To accelerate recovery, repatriation of eastern indigo snake populations in areas of extirpation is underway. Since listing under the ESA, wild collection of eastern indigo snakes for the pet trade is no longer believed to be a significant threat. Land conservation has increased in some areas, especially where there are on-going efforts to conserve gopher tortoise populations. These conservation efforts have diminished the threat of gassing gopher tortoise burrows, and will have lasting conservation benefits for the eastern indigo snake across much of its range.

Biological populations of eastern indigo snakes are unknown; thus, for this assessment we defined populations using species’ movement and home range data from the literature (i.e. buffered occurrence data by 5 miles (8 kilometers)). To maintain species viability, resilient eastern indigo snake populations need large habitat patches (>10,000 acres (> 4,046 hectares)) of good quality habitat (diverse, unfragmented, few roads), with adequate shelter sites (e.g. gopher tortoise burrows), and connectivity among one or more populations for genetic exchange. The species needs genetic and ecological diversity (representation) to maintain adaptive potential and, multiple populations (redundancy) across representative units to withstand catastrophic events. To assess current condition we measured population and habitat factors and assigned resiliency classes to populations based on the best available information on the species’ biology. We then considered the representation and redundancy of populations across the species’ range. To assess future conditions, we used models to forecast habitat fragmentation and loss due to urbanization and sea level rise at two future times, at years 2050 and 2070. We also considered the potential of targeted conservation action (i.e. habitat conservation and population repatriation) to improve species viability. 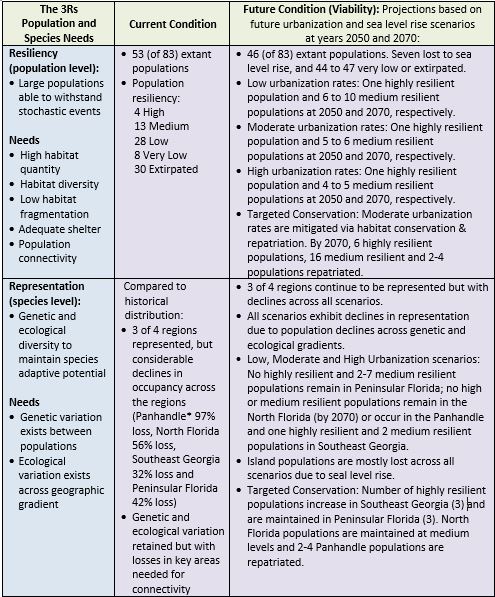